Introducing one of a kind beachfront apartment near Kamakura. 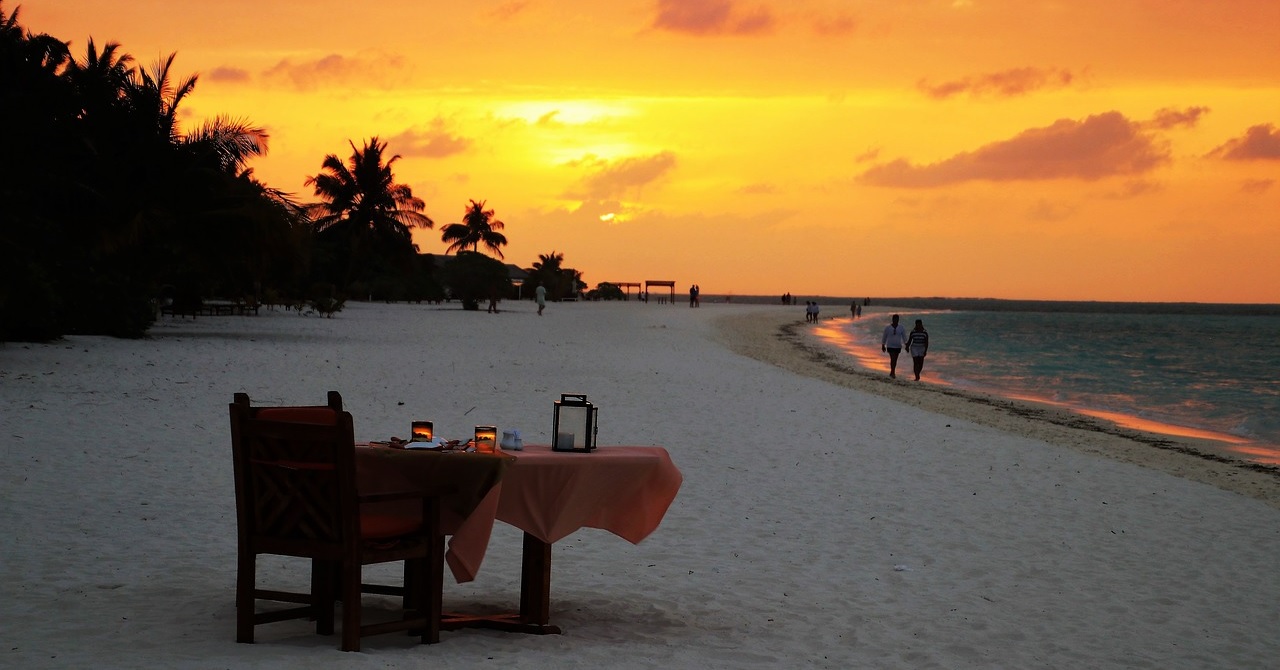 A cozy home surrounded by stretches of beautiful nature.

You will feel relaxed and comfortable in a space not unlike your friend from California’s home.

Here, the ocean breeze will kiss you gently.

Along with the glitter of the water,

you can hear the sound of the waves and you can gaze at the fiery sunset,

at the twinkling of the stars in the sky,

and then you can feel the refreshing  fragrance of a new morning.

keeping you away from the hustle and bustle of a large city. 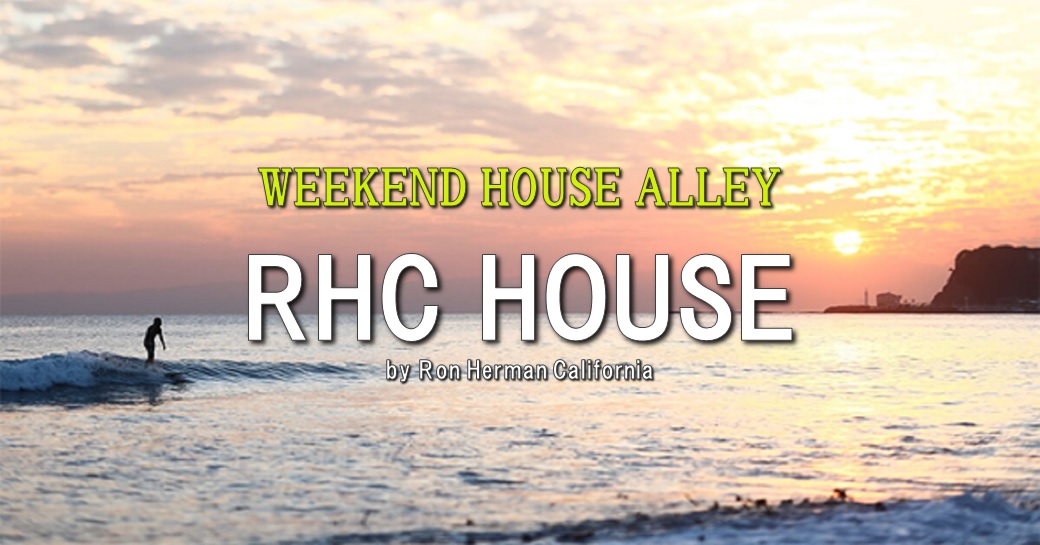 The house, RHC HOUSE, was named after Ron Herman California(*1).

This special guest house is located above the RHC Ron Herman Shichirigahama-store(*2),

it embodies the word of Ron Herman and it is one of a kind.

Since its inception, he continues to propose the "Californian Style of Life".

gaining tremendous support and trust from male and female clients.

Being a buyer and a vintage collector himself,

he pours his love and passion for fashion into his brand.

Within the mini mall, one can visit "Bill's” aka "the best breakfast in the world"

where pancakes and other popular dishes are served.

Among other shops, there’s also a renowned hair salon as well as a surf shop.

Located on Route 134, near the Shonan beachfront,

it is said to be a perfect location for Ron Herman,

which proposes a lifestyle akin to the West Californian Style.

It is only 2 minutes on foot to the nearest station, Shichirigahama sta. on Enoshima Line. 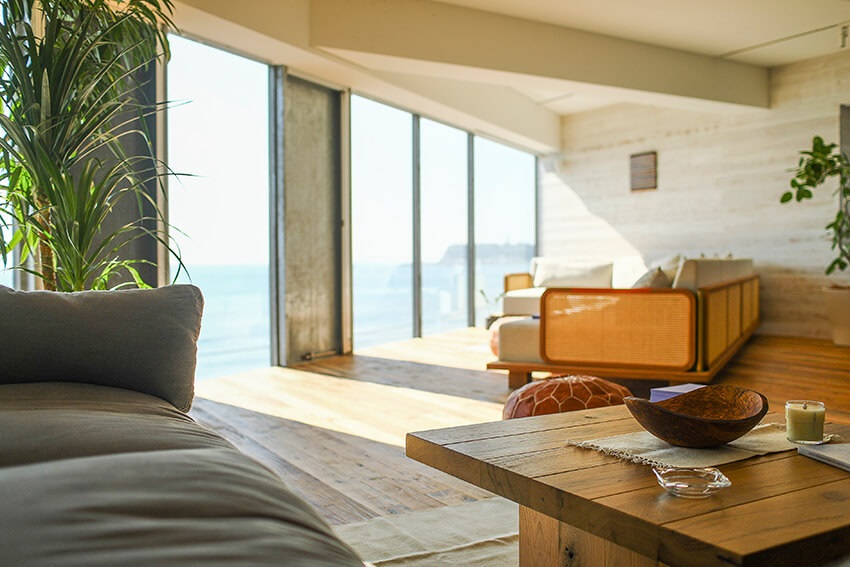 A look at the superb view

The unique location and panorama

Because of Ron Herman’s view of the world,

you can experience the “California Lifestyle”. 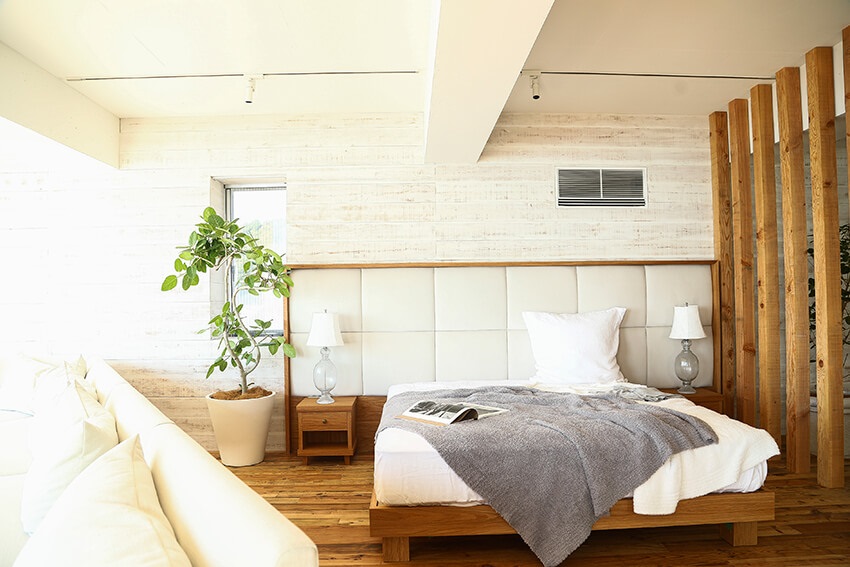 Both bedrooms are furnished

The gentle sound of the waves

will invite you to a soothing night of sleep.

Simmons beds and mattresses are used in luxury hotels such as the Imperial Hotel and The Peninsula Tokyo.

Due to the wonderful sleeping experiences of the guests, many of them are now seriously considering buying Simmons' products for their own home comfort. 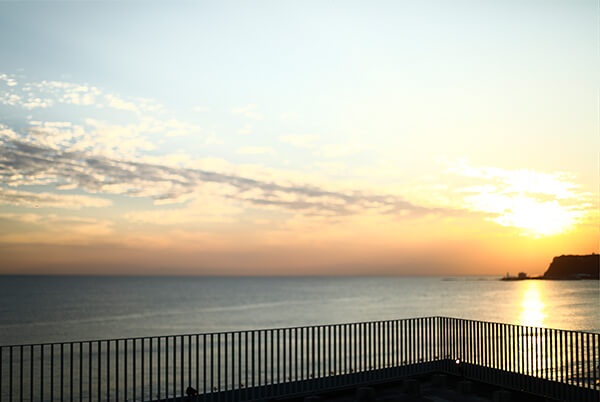 Here, you can get a magnificent view

and a beautiful sunset all to yourself,

to the east: Hayama,

Zushi and Kamakura can be seen

and to the west: Enoshima and Mt. Fuji. 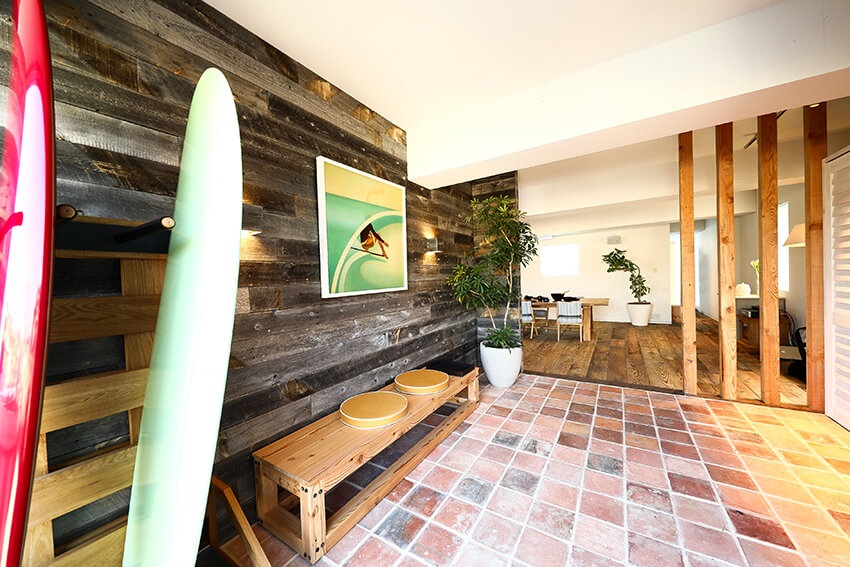 After enjoying surfing at the beach

just in front of your place,

you can go home and put your board

on the surfboard rack,

then you can remove your wetsuit in total comfort

thanks to the spacious entrance. 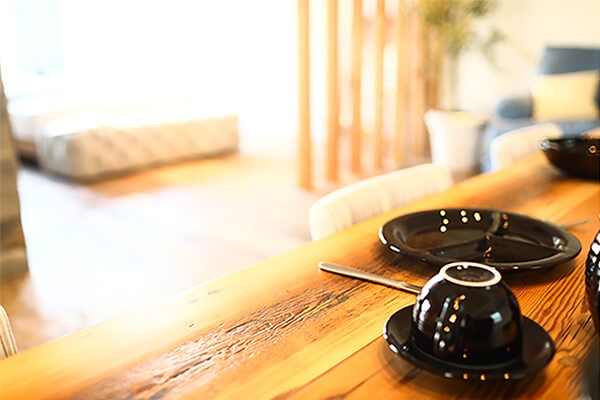 Here, you can eat at a high quality

just like you would find it at your friend ’s

with this table made of the best materials. 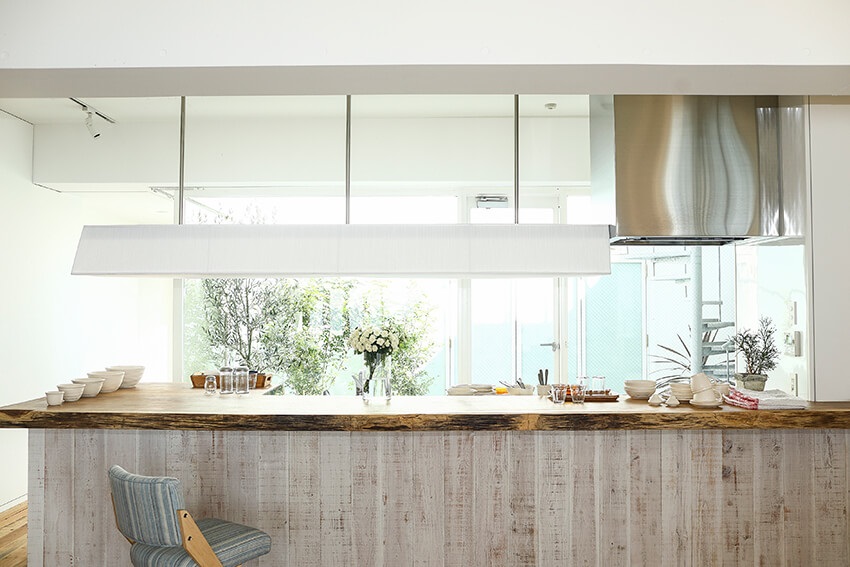 In the wide-open kitchen

the brilliant sunlight is coming through the courtyard.

You look up casually

and you gaze at the vast and distant  horizon.

You can forget the dreary routine of daily life as

if you were on a calm sea, yet you're right at home. 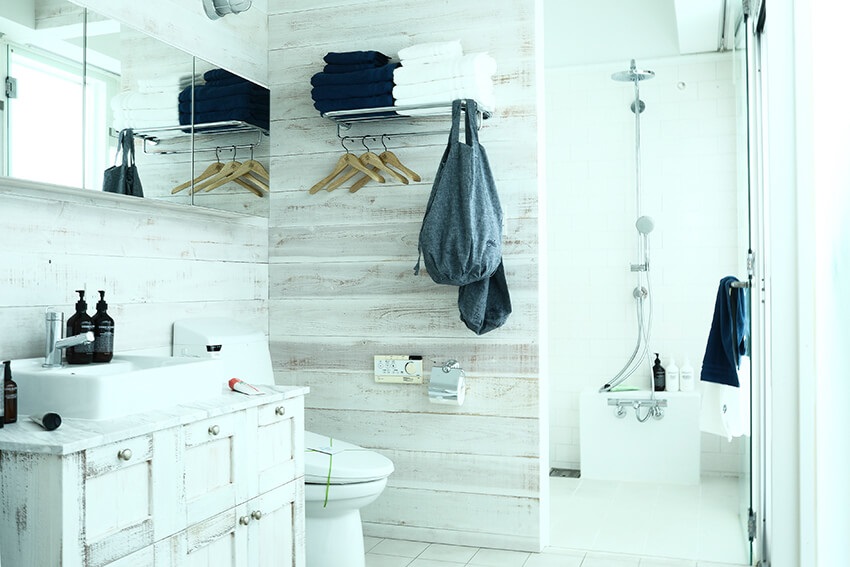 Bathroom with a flood of light

The bathroom has a basic tone of white while a gentle

and soft light comes in through the courtyard. 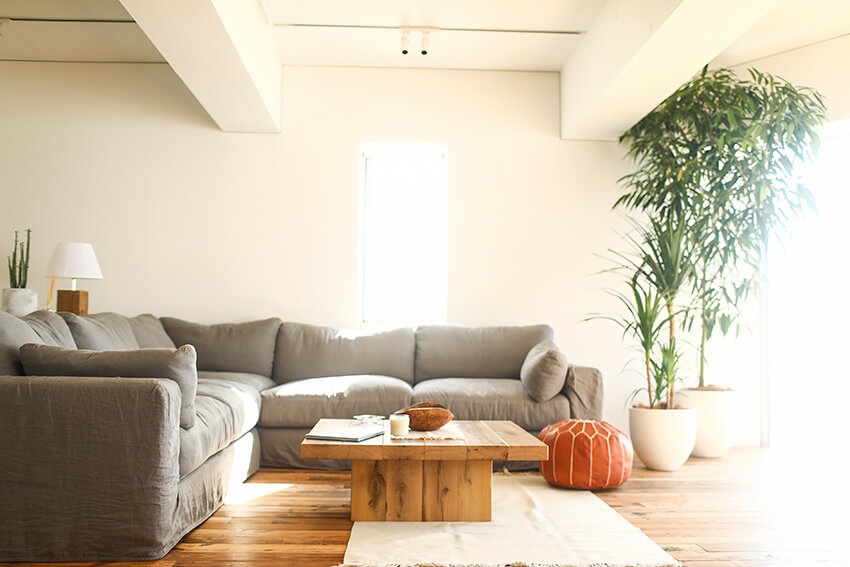 Let’s watch the sunset as we sit comfortably

on the large and cozy sofa.

The living room has a soothingly serene

and peaceful atmosphere for you to relax in. 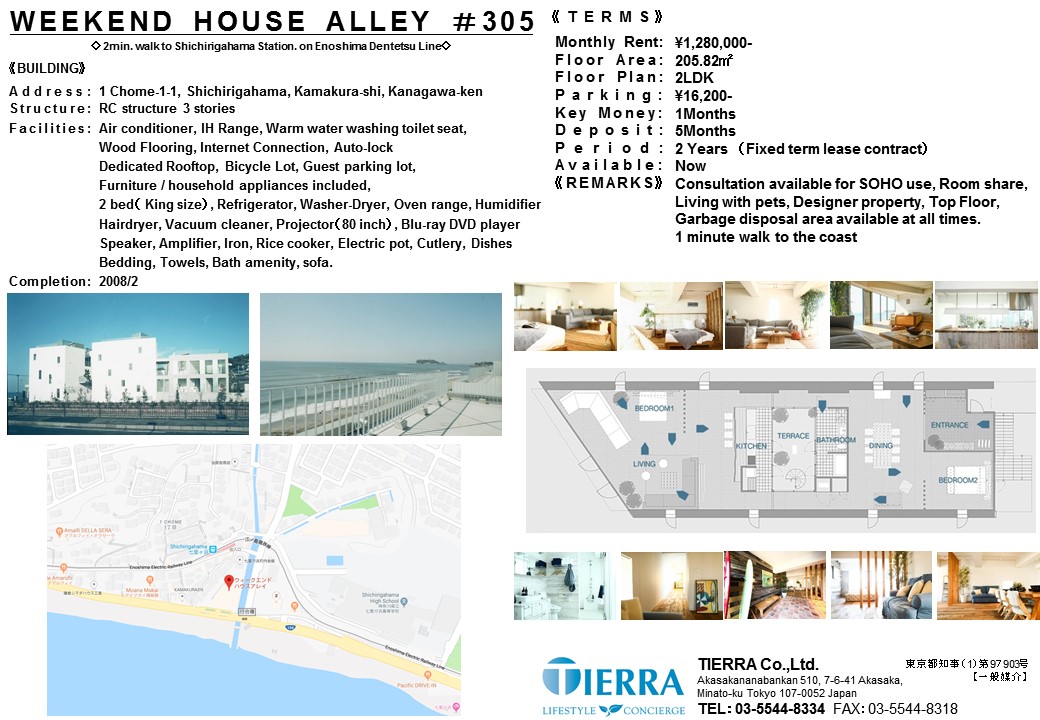